What is and isn’t a ranking factor in search? Here are the latest thoughts by industry experts on search ranking factors and particularly Google Ranking Factors as they are in 2016.

Content & Links Are the Two Most Important Ranking Signals

Eric Enge noted in a post that he participated in a Hangout with Google’s Andrey Lippatsev, Search Quality Senior Strategist, who was asked about the top 3 ranking signals, noting that RankBrain was announced as the third most important. “I can tell you what they are. It’s content and links going into your site,” answered Lippatesev.

“When you aren’t facing page relevance or quality issues, links can, and do, continue to significantly impact rankings.” said Enge.

“Backlinks remain an extremely important Google ranking factor,” said Brian Dean founder of Backlinko in a recent blog post on Google Ranking Factors. “We found the number of domains linking to a page correlated with rankings more than any other factor.” Read more on the Backlinko Ranking Study at the end of this article.

Danny Sullivan of SearchEngineLand wrote an interesting piece on how RankBrain has now become the third most important ranking factor behind content and links. According to a report onBackChannel RankBrain is being used on almost ALL search queries helping determine the most relevant results and their order:

Google is characteristically fuzzy on exactly how it improves search (something to do with the long tail? Better interpretation of ambiguous requests?) but Jeff Dean says that RankBrain is “involved in every query,” and affects the actual rankings “probably not in every query but in a lot of queries.” What’s more, it’s hugely effective. Of the hundreds of “signals” Google search uses when it calculates its rankings (a signal might be the user’s geographical location, or whether the headline on a page matches the text in the query), RankBrain is now rated as the third most useful.

Click-Through Rate (CTR) is Not a Ranking Factor

“I think we can establish that CTR is not a direct ranking signal for Google. At the same time, it can have an indirect effect,” said Eric Enge in a recent video (below) they posted on their marketing website Stone Temple Consulting. “Lots of people clicking on a certain result might indicate a real interest in it, and that might mean it’s a better result than the result above it. Notice I said might there. That will be important later. Anyway, many people have assumed that search engines like Google would use such a signal, of course, bouncing it off against other signals that it uses in ranking.”

So with that answer, one wonders why isn’t then CTR a ranking signal? Primarily because Google has told us they don’t, commented Enge. He noted that it’s simply too easy to game and that it doesn’t necessarily mean the user was satisfied with the result. Google uses it internally for studying search behavior but it is not a ranking signal. He provided this chart in a recent blog post. Enge wrote another article about CTR as a (non) ranking factor here.

“30x redirects don’t lose PageRank anymore,” Google’s Gary Illyes said in a tweet yesterday. Eric Enge asked Illyes in a Twitter reply if the redirects are “not even a dampening factor?” Illyes replied, “@stonetemple for PageRank, no.” Barry Schwartz of Search Engine Land has more.

2016 Quantitative Local Search Ranking Factors Study: If you want your business to rank better in local search results, focus on building popularity for your business, as the results of the study indicate that business popularity seems to outweigh all other factors, most importantly in the form of reviews and quality backlinks to your site. Google Review and Profile View are by far the two most important local business ranking factors.

Dan Leibson, Vice President of Local & Product at Local SEO Guide, made a presentation on this study at SMX Advanced 2016: 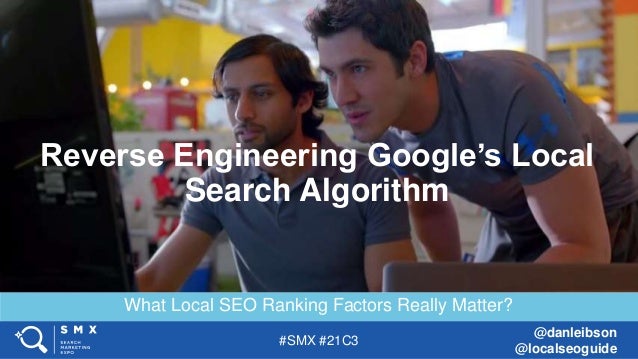 “Last year, we started using mobile-friendliness as a ranking signal on mobile searches,” said Klemen Kloboves, a software engineer at Google, in a Google Webmaster blog post. “Today we’re announcing that beginning in May, we’ll start rolling out an update to mobile search results that increases the effect of the ranking signal to help our users find even more pages that are relevant and mobile-friendly.”

Jennifer Slegg of The SEM Post noted that Illyes mention of this at Search Marketing Summit Sydney was the first time that Google confirmed that it indeed plans to make page speed a factor in its next mobile friendly update. Illyes told Jennnifer that the update will be in a matter of months. Illyes has been hinting at mobile friendly sites ranking higher for months.

“We recently completed a major revision of our rater guidelines to adapt to this mobile world, recognizing that people use search differently when they carry internet-connected devices with them all the time,” said Mimi Underwood, Sr. Program Manager of Google Search Growth & Analysis. “You can find that update here (PDF).”

Enge also says that there are other factors contributing to less appearance of a site on the first page of a Google search result, which is in effect a lower ranking:

The Backlinko Study is unbelievably helpful in understanding all ranking factors, not just the new ones that happened in 2016. Backlinko analyzed 1 million Google search results to answer the question: Which factors correlate with first page search engine rankings?

How to Use Facebook Feed to Upgrade Your Marketing Game? 4 min read

How to Use Facebook Feed to Upgrade Your Marketing Game?

3 weeks ago
Go to mobile version