Over the past 24 hours, I’ve been tracking what I would call mild chatter in the SEO community around a potential Google algorithm ranking update on April 4th. I would categorize this at best as a small update, in terms of what SEOs are at least chatting about.

The WebmasterWorld and Black Hat World threads discussing this are not that active. But there are SEOs who have taken notice. Here are some of what the SEOs are saying:

I see big updates on rankings yesterdayThere are a lot of serps with two results of the same domain, even three results of same domain.

Impressions and clicks data in Google Search Console changes the same day, April 3, an upward trend in desktop version, and downwards trend in mobile version (in my case)

I am seeing some weakness in traffic yesterday and this morning. Is this the start of the monthly update?

For a while now my website has been ranking at position 1-3 for multiple keywords. Last night, about 10~ hours ago everything dropped to ‘not found in the first 200’ for all main keywords except for one.

Seems they are tweaking FRED, some of the pages I haven’t adjusted yet got hit. Well, they others are doing fine.

Plus some people messaged me on Twitter, here are just some of those tweets:

Personally, I do not think this is Google Fred related or any of the animals but what do I know.

Some, not all, of the automated ranking tools, are showing slight upticks in weather patterns with the Google results on or around April 4th: 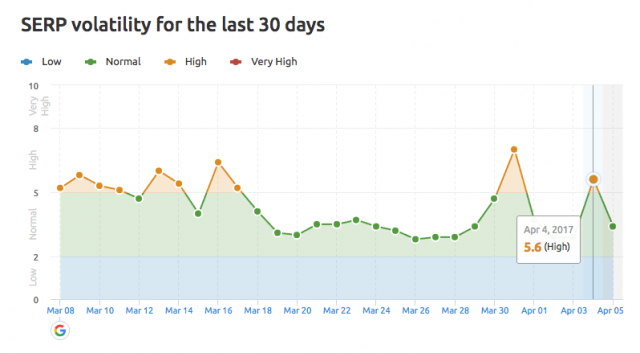 So something did happen but again, SEOs for the most part didn’t take that much notice.

How to Use Facebook Feed to Upgrade Your Marketing Game? 4 min read

How to Use Facebook Feed to Upgrade Your Marketing Game?

3 weeks ago
Go to mobile version